With a population of about 53.5 million (1994 census, updated June 1998), Ethiopia represents a melting pot of ancient cultures with Middle Eastern and African cultures evident in the religious, ethnic and language composition of its Semitic, Cushitic, Omotic and Nilotic peoples. The Ethiopian peoples comprise about eighty nationalities of which the Amhara and the Oromo constitute the majority, with about 60 percent of the total population. 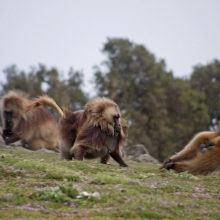