It is almost certain that Ethiopia is the cradle of mankind. Modern human being and its hominid ancestors evolved in the eastern zone of the great African Rift Valley. “Lucy”, one of our most distant ancestors, lived around 3.2 million years ago and it was found in the Awash Valley. Recently the discovery of an even older hominid fossil in the Afar desert, 4.4 million years old “Ardi”, has been published.

Ethiopia was known from the dawn of civilisation and has a 3000 years old history. The ancient Egyptians knew that their sacred and vital river Nile originated from a lake on a plateau in the land of “Punt” (“Land of the Gods” in their language) and they knew about a garden existing beyond the desert.

The legendary history of this country starts with the mythical Queen of Sheba who, after paying visit to the biblical King Salomon in Jerusalem, gave birth to his son Menelik I, the latter king of the Sabean or Axumite Empire. He took the Ark of the Covenant from the temple in Jerusalem to Ethiopia, where it is believed to rest until now.

However, also historical sources bear witness to the existence of a rich and powerful kingdom with a high level of civilisation in pre-Christian times. From its capital city in the north-eastern part of the country, not far from the Red Sea the Axumite Empire controlled once a vast territory, including parts of today’s Yemen and Sudan. It was an important crossroads of trading caravans from Europe, Africa and Asia. The empire used its own written language, Ge’ez and its own coins which were employed in trade. With the conversion to Christianity of King Ezana in 340 A.D. Ethiopia can be considered one of the first Christian states. Before, Judaism, introduced most probably by several waves of immigration from Israel, had played a major role in the northern and western centres of the country. From that time on, Christianity has become a major component of Ethiopian culture, up to date. After the decline of the Axumite Empire, 1137 to 1270 A.D., the Zagwe dynasty established its reign over big parts of the country, with the centre of power in Lasta, the area around Lalibela. King Lalibela was the most appreciated king of the Zagwe dynasty and later the town was named after him. It was he who ordered the construction of the sacred town, considered as a “New Jerusalem”. He built 11 rock-hewn churches, all carved out of the red mountain rock. Until today they have been very important places of worship. When the Zagwe dynasty declined, several years of changing rulers and coalitions, conflicts and wars followed, until under Emperor Fasilidas (1632-67) the small village of Gondar in the north was turned into the new capital city and a great religious and artistic centre.

In recent history there were other great kings who were able to unify and enlarge the country and oppose foreign invasions and interferences. Kassa Hailu was crowned in 1855 as the “King of Kings” with the crown name of Tewodros II. He ruled the country with strong hands and moved his capital first to Debre Tabor, then to Maqdala, where he built his stronghold in the mountains. There he captured British diplomats, whereupon British troops landed on the Read Sea to liberate them. In 1868 he committed suicide to avoid falling into British hands. The following emperors were Yohannes IV and then Menelik II, who extended the country to its actual size, defeated the Italian invaders in the historical battle of Adwa in 1896, founded the actual capital Addis Ababa and brought modern developments like cars, trains and electricity to Ethiopia.

Haile Selassie, (“Power of Trinity” in Amharic, the official Ethiopian language), the last great emperor crowned in 1930, reigned for half a century until he was overthrown by a socialistic-inspired revolution in 1974. The military committee called the “Derg” under the brutal Leadership of Mengistu Haile Mariam ruled Ethiopia until 1991, when it was overthrown and the first democratic republic was installed.

Many monuments of the ancient and glorious past of this country remain: the monolithic churches of Lalibela, the carved obelisks and churches of Axum, more than 120 monasteries and rock churches in the Tigray region, as well as those scattered here and there along Lake Tana, the source of the Blue Nile. In each of these sacred places ancient paintings, manuscripts and sacred objects are preserved. The diversity of ancient cultures, customs and celebrations are testimonies of the persistent importance of Ethiopia’s history and the Ethiopian Orthodox Christianity with its traditions and ceremonies is still a major part of every day’s life. 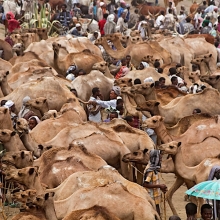