With an area of 114 million square kilometres, Ethiopia is as large as France and Spain combined and is five times the size of the UK. From the north and running down the centre are the Abyssinian highlands. To the west of the chain the land drops to the grasslands of Sudan, to the east to the deserts of the Afar. South of Addis Ababa, the land is dominated by the Rift Valley Lakes.

Ethiopia is strategically located in the Horn of Africa. Its proximity to the Middle East and Europe, together with its easy access to the major ports of the region, enhances its international trade. It is bordered by the Sudan in the west, Somalia and Djibouti in the east, Eritrea in the north and Kenya in the south.

The most famous Ethiopian river is the Blue Nile (or Abbay), which runs a distance of 1,540 kilometres from its source in Lake Tana, to join the White Nile at Khartoum. Other main rivers include the Tekezze (which joins the Nile in the Sudan), the Awash, the Wabe Shabele, the Omo, the Baro and Birbir. 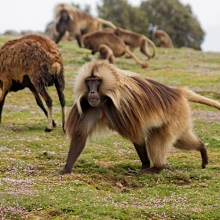